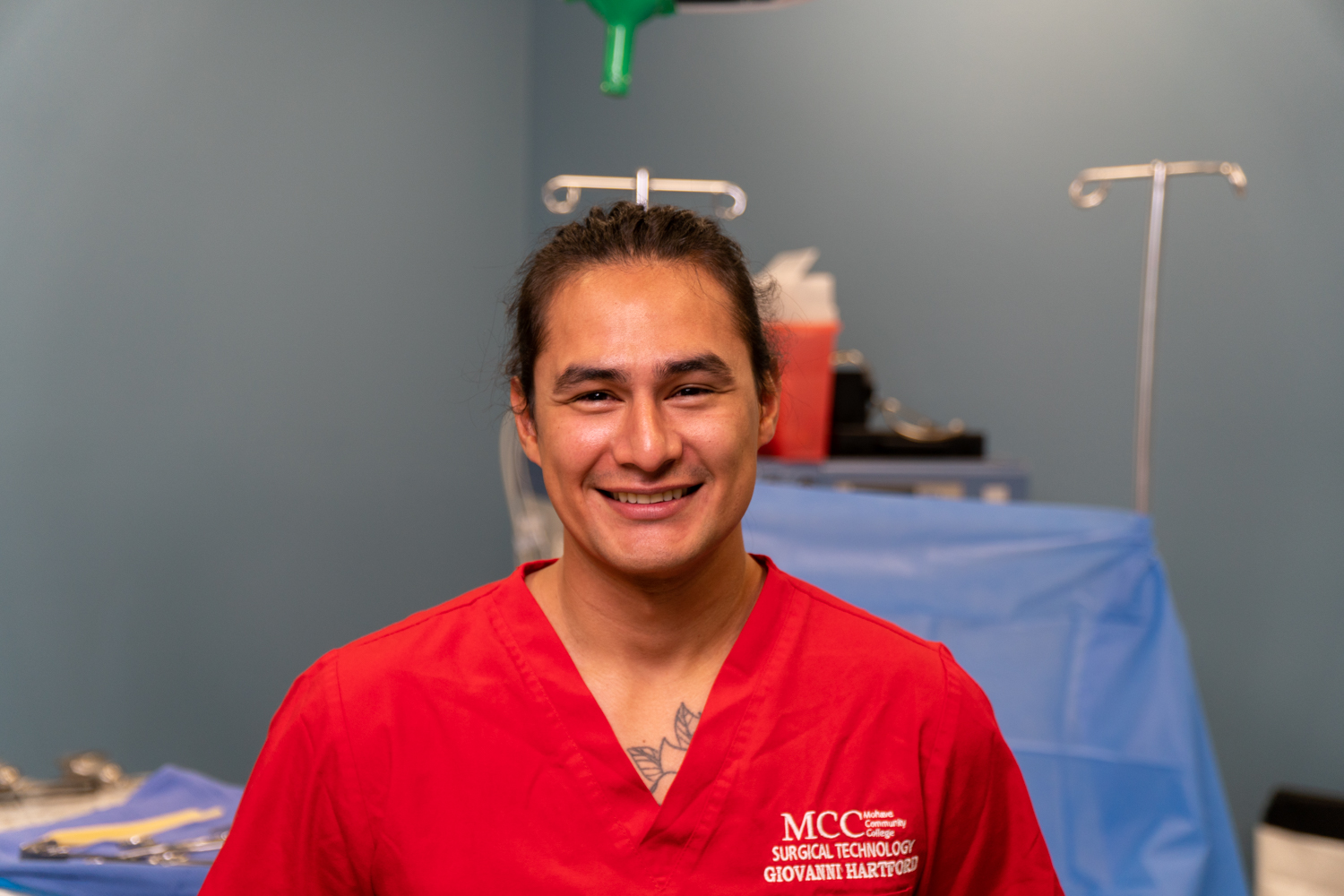 MOHAVE COUNTY – Giovanni Hartford has been a Surgical Technology student at Mohave Community College for two years, is graduating this semester and already has a job lined up.

Before Hartford joined the MCC family, he was in the Marine Corp for four years. After leaving the service, he knew he wanted to be part of the medical profession when his grandfather was diagnosed with colon cancer because he wanted to know what was going on and help his family during that time.

Hartford attended MCC’s EMT and firefighting programs and decided to stay and earn his degree at MCC in Surgical Technology because he found the enthusiasm of the instructors inspiring.

“I realized I wanted to push myself even more and ended up applying for the surgical technology program. I’ve been doing it for about two years and love every second of it,” Hartford said.

The surgical technology program prepares students for the operating room by teaching aseptic technique, patient positioning, and draping the operative site. Students also learn a variety of surgical procedures, and how to properly pass instrumentation to surgeons.

Hartford said he enjoys the surgical technology program because he knows he is actually helping someone, and everything he learned “blew his mind.”

“Knowing that I’m in charge of the back table and everything that’s sterile so the patient can have a successful outcome from the procedure is what I find rewarding about the program,” he said.

Hartford added, his favorite part of the program is the knowledge he has to continue with this profession and how prepared he is to deal with situations that occur in the operating room.

Having a military background provided a foundation to make him successful in the surgical technology program, he was able to stay motivated when things got rough and gave respect where respect was due.

“I understand the roles that need to be played in order for the team to get the job done. Coming from the military helped me focus on what needed to be done and not what I wanted to get done, I was able to differentiate feels from reality,” he said.

Hartford did so well at his clinical site; Valley View Medical Center in Bullhead City that he was offered a job as a surgical technologist, and is due to start April 20.

Advice he would give potential surgical technology students is to go for it and try it. For current students he says to push through even on the toughest day because it’s worth it at the end.

After working a few years as a surgical technologist, he hopes to continue his education to become a first assist. Hartford was born and raised in Bullhead City and graduated from Mohave High School in 2011. In his free time, he enjoys playing his Nintendo Switch, beating his friends at Mario Kart and making pizzas.