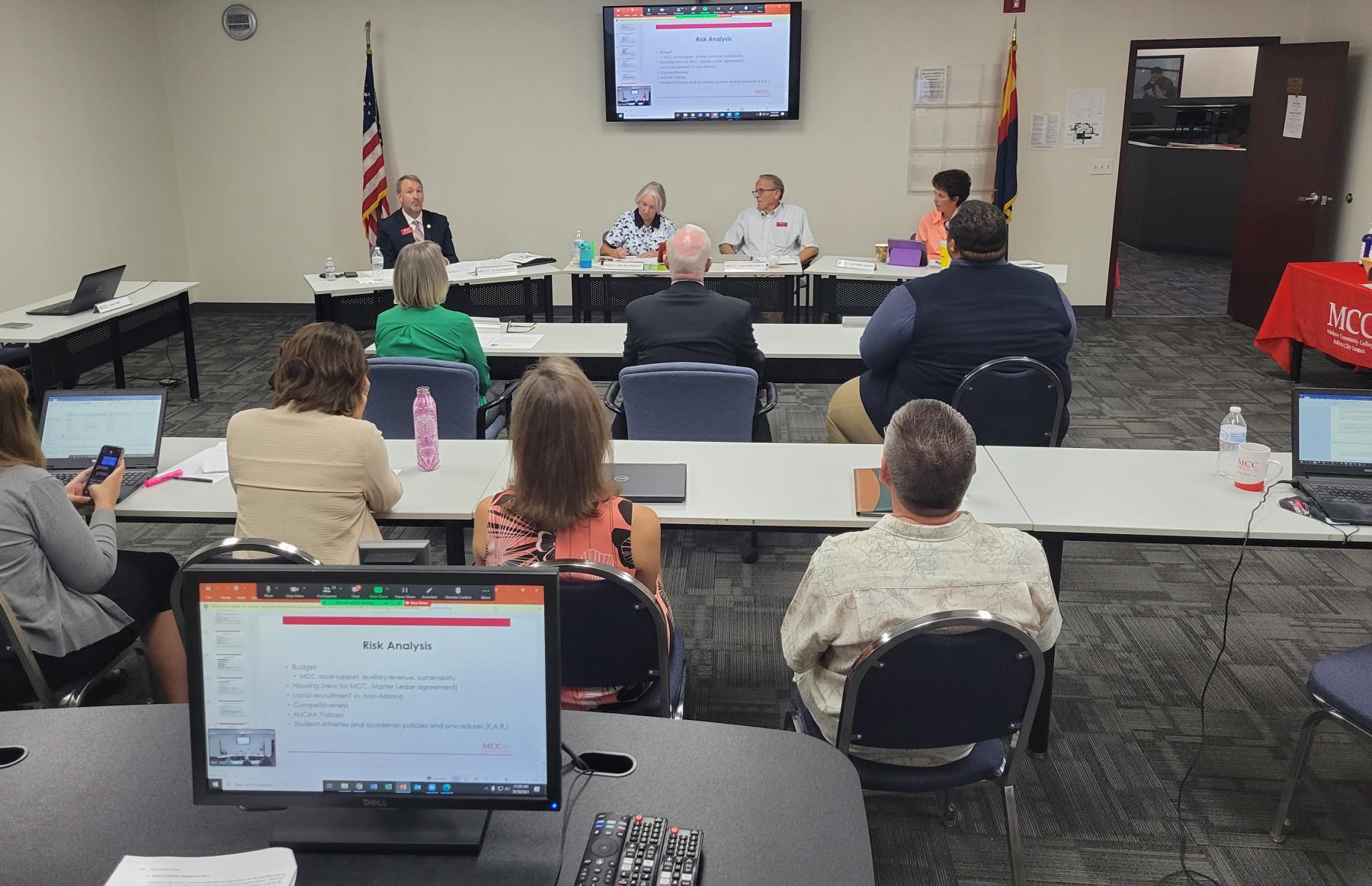 Posted on September 10, 2021October 8, 2021 in Governing board, Leadership, Press Release.
Bookmark the permalink.

MOHAVE COUNTY – It was a who’s who of community leaders at the MCC board meeting in Bullhead City on Friday.  In attendance were the City Mayor, City Manager, local business owners and other dignitaries, all showing support and encouraging the board to approve a college men’s and women’s soccer program.

This is the first time since Mohave Community College was founded in 1971 that the college board is considering a proposal to start a collegiate athletic program.

MCC President Dr. Stacy Klippenstein said community interest is very high, and that as soon as he started at MCC in 2019, he was “almost immediately approached by community members asking how they could help MCC start an athletics program, specifically soccer.”

Since then, a group of community leaders in the Bullhead City-Fort Mohave area have volunteered time to help the college identify potential facilities and areas of community support.

Dr. Klippenstein said the college determined a soccer program would add value to MCC and benefit students and local communities. He explained the college would be able to attract students who might otherwise not attend college, or may attend a college that has soccer.

“Our plan would always be to first recruit as many players as we can from Mohave County so they could stay here and play for their hometown team,” said Dr. Klippenstein, noting that over the past several years nearly three dozen local high school soccer players left Mohave County to attend community colleges in Arizona that have collegiate soccer.

The MCC board was also informed that the BHHS Legacy Foundation has pledged $300,000 to help the college launch the NJCAA soccer teams. Dr. Klippenstein said no property tax money would be used to get the programs up and running, and he has a goal for the programs to be financially self-sustaining in the long term.

All of the future booster club members attended the board meeting and pledged support. They encouraged the board members to vote in favor of plans to join the NJCAA and start MCC soccer.

“There’s literally thousands of tremendously bright young people engaged in soccer and sports in our region,” said Judge Steven Moss. “I’ve observed somewhat of a brain drain in our region because these bright young people want to continue playing sports, so they go to community colleges in Phoenix, Prescott, and Southern California and they don’t come back, and we in Mohave County have lost that talent pool.”

Burgess brought two of his soccer players from Mohave High School who told the MCC board that many local student-athletes would stay in Mohave County and play college soccer if MCC offered it.

“It would be an amazing opportunity for kids in Mohave County to get an affordable education while staying close to home,” said Rhyah Jackson, Mohave High School student. “It’s really hard when you have to go far from home to attend college and play your sport.”

Bullhead City Mayor Tom Brady and City Manager Toby Cotter told the board that the city fully supports the college starting collegiate soccer. “This is a wonderful opportunity for the college, the city and the players, so let’s all work together to make it happen,” said Mayor Brady.

City Manager Toby Cotter offered insight on the possibility of an MCC Booster Club raising funds to support the teams, in lieu of tax money. “This is not an understatement – if the Booster Club runs just one weekend tournament at the Rotary Park fields to benefit the soccer program, they could generate at least $30,000 dollars, and that’s just one weekend,” said Cotter. “We have another promoter who puts together a weekend tournament and it generates far more than $30,000.”

Anderson Auto Group Fieldhouse General Manager Ed Catalfamo discussed a partnership in which the field house could become the college team’s home field. The field house is directly across Highway 95 from the Bullhead City campus.

“This is an amazing opportunity and we have the right people in place for community support, it’s a positive move for the college, the community and our kids because the kids are what it’s really about,” said Catalfamo.

MCC board members will decide in its October 8 meeting whether the college should move forward with plans to start NJCAA soccer. The meeting will be held at the Havasu campus and begins at 9:00 a.m.

The public is also encouraged to email comments about the possibility of the college starting a men’s and women’s soccer program to mcc@mohave.edu.

MCC board listens to presentation in support of the college joining the NJCAA and starting a soccer program for men and women.