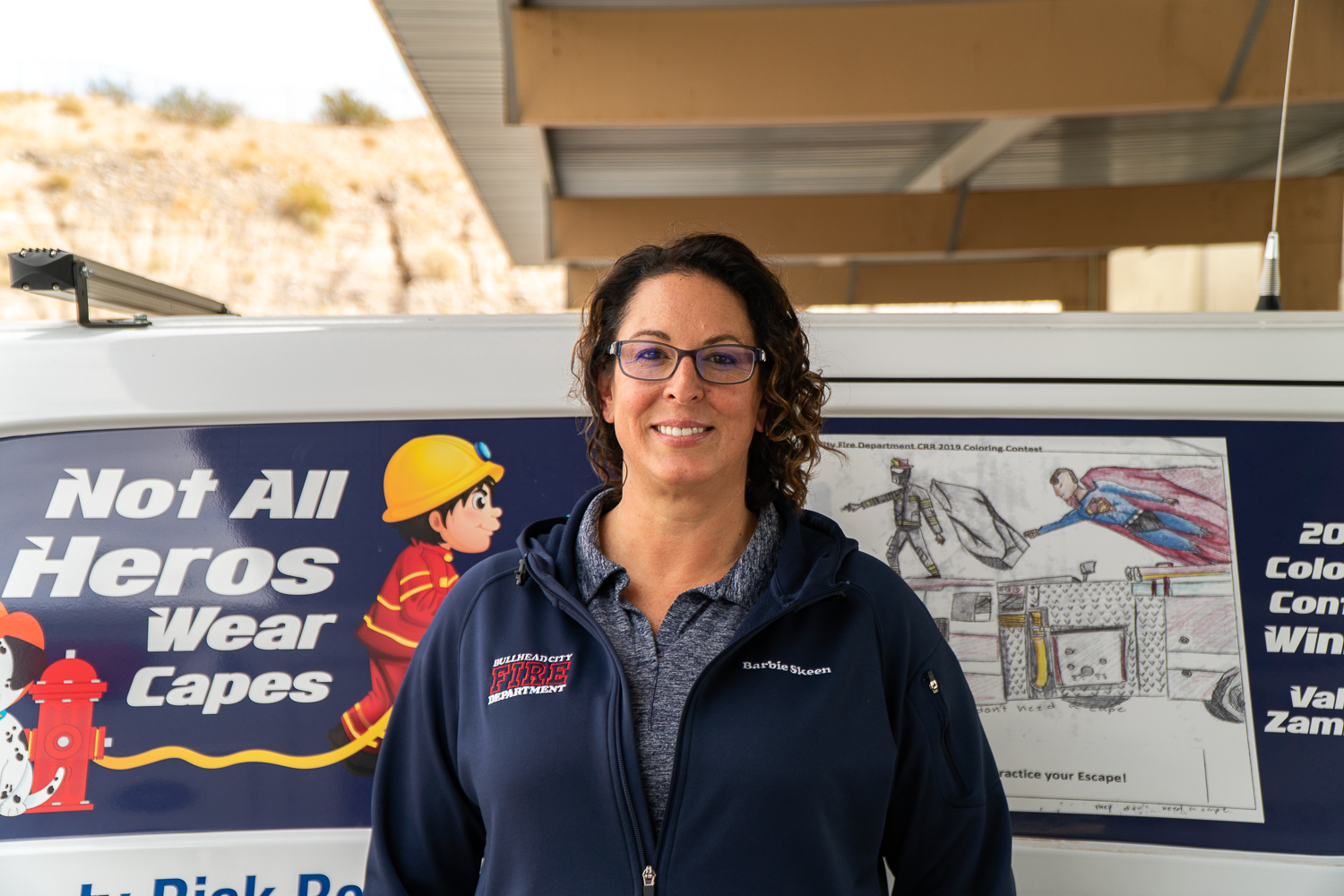 Posted on February 5, 2021 in Press Release.
Bookmark the permalink.

MOHAVE COUNTY – Barbie Barrett is the first female Fire Marshal with Bullhead City Fire Department and she also happens to be an MCC Fire Science instructor.

As a fire marshal, Barrett is very involved in the community because her division leads the community risk reduction and public education programs. Her division is also in charge of fire safety inspections and fire investigations.

“It’s a good feeling to be the fire marshal in general but I hope being in the position I’m able to reach out to young girls and women in our community and other communities and be a role model for them,” Barrett said. “And let them see you can be anything you want to be and hopefully we’ll have more women in the fire profession and in a leadership position.”

Her favorite part of her jobs is the people she gets to work with side-by-side on a daily basis and community members. At Bullhead City Fire Department, she started out as a public education specialist, then a fire inspector and a fire investigator.

“I really get to see a lot of people that I may have not had contact with in my personal life, so in my professional life I get to develop a lot of different relationships with a lot of aspects in our community,” Barrett said.

Barrett was always attracted to the fire service industry because she was exposed to it growing up. Her father was a battalion chief for the Bullhead City Fire Department for 30 years and the fire service has always seemed like a family to Barrett.

Being part of the fire services profession has allowed Barrett to be an MCC Fire Science instructor. She “loves” being an MCC instructor because she is able to interact with students who are joining the profession.

“I get to interact with students coming into our profession and I get to put a plug for community risk reduction right away,” she said.

Barrett said it’s more than fighting fires and cutting people out of cars and a big aspect of the fire services is community risk reduction. At MCC she teaches, FSC 133: Fundamentals of Fire Prevention, FSC 242: Fire Investigation and FSC 222: Fire Suppression Systems.

She has been with MCC since 2012. Barrett said she became involved with MCC when the former program director asked her to teach a concurrent fire science class at the high school.

Barrett has been in the Bullhead City area since she was 9 years old. She attended Desert Valley Elementary, Bullhead City Middle School and graduated from Mohave High School. After high school she continued her education at Scottsdale Community College to earn her associate’s degree in fire science, then she attended Arizona State University and received her bachelor’s degree in fire service management, and at Grand Canyon University Barrett earned her master’s in executive fire officer leadership and disaster preparedness.

During her spare time Barrett enjoys spending time with her children and go swimming. She also breeds and shows Great Danes. Barrett’s interest in showing Great Danes started when another local dog breeder took her to her first dog show.

She said she has done American Kennel Club dog shows, and she’s the owner and handler, so she’s running around the ring with her dog.

To learn more about MCC’s Fire Science program, visit www.Mohave.edu/FireScience. There’s still time to sign up for free at apply.mohave.edu.