Dozens of people showed up to see the stars, planets and moon as MCC unveiled its new observatory this week on the Neal Campus-Kingman.

The building itself may look small, but it opens eyes to the universe.  The college Art Club students painted the building with an astronomy theme to makes sure it’s noticed.

College student leaders have been working for a more than a year to the get the observatory on campus.

It was chilly as people began to walk along the path to the observatory before the sun had completely set. The clear skies helped give people an amazing look at the moon through the powerful telescope that the High Desert Astronomy Club donated to the college.

Standing more than six feet tall and boasting a 16 inch objective lens, the Mead Starfinder Dobsonian is a powerhouse of a telescope and several people in the crowd were heard boasting that they could count the craters on the moon.

The college also provided hot chocolate, which people drank as they waited in line to look through the telescope.

As the sun went down, more people showed up. The crowd doubled in size and the line to see through the telescope grew, as the stars of the show had arrived in the sky. Event organizers turned the large telescope to face the Andromeda Galaxy 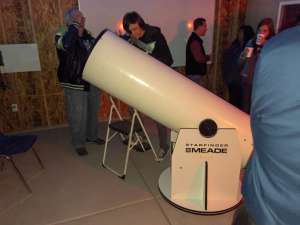 High Desert Astronomy Club members also brought out their own telescopes, setting them up around the clearing and pointing them at different planets, stars, constellations and the Moon.

Happy to let people stare through their valuable equipment these, the helpful community members also shared their knowledge of the stars. In fact, you were never more than a few people away from someone who would happily break off what they were doing to educate anyone asking about the Andromeda Galaxy, the telescopes, or any other questions that seemed to bubble up from the surrounding crowd.”I was very excited about the observatory, I think it’s something special for Kingman. I was able to see Andromeda, which I learned is about 2.5 million light years away.” Kim Rogers said.
While the grand opening of the observatory was a clear success with those who attended, organizers said there is still work to be done, including a paved pathway leading to the new building.

The college plans to use the new observatory in future events, and they want to remind people that it is also available for use by the community.

If you would like to reserve the observatory for an event, please contact MCC Neal Campus-Kingman Dean Fred Gilbert at 1-866-MOHAVECC or fgilbert@mohave.edu.