The two were chosen to be members of the All-Arizona Community College Academic Team.

The honor comes with $500 each and free tuition at any of the public universities in Arizona, where they can complete their advanced higher education degrees after graduating from MCC.

The MCC Board of Governors Trustees learned about Johnson and Laflamme’s accomplishments during the March board meeting on the Lake Havasu City on Friday. 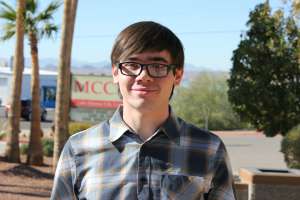 “We are very proud to let you know about our All-Arizona Academic Team members,” Bree Karlin, MCC director of advising and testing services told the board. ”They have demonstrated outstanding scholarship, leadership, service to their community and were selected for the team by Phi Theta Kappa – the international honor society for community colleges.”

Johnson, a Lake Havasu City Campus student, was at the board meeting and told the trustees how it felt to make the academic team, knowing he and his family will not have to pay his university tuition.

“I was shocked, this is such an amazing opportunity,” said Johnson, a homeschool student who first started taking classes at MCC when he was 16.  “I never would have thought this was a possibility just a few years ago.”

Johnson is a biology major and plans to pursue a bachelor’s and master’s degree at either ASU or NAU, with the goal of becoming a wildlife biologist or field researcher. 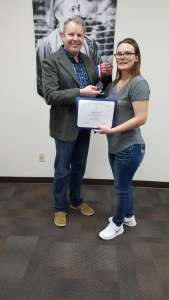 College Dean Shawn Bristle presented Ashley Laflamme with her All Arizona Academic Team award. Laflamme was unable to attend on the date of the ceremony in Phoenix.

When Laflamme graduates from MCC she plans to transfer her credits to NAU and pursue a bachelor’s degree in psychology.

“With God all things are possible,” said Laflamme, who attends classes at the college’s Bullhead City campus.  “My parents have been very proud of me. My father tells me every time I talk to him how proud he is of me, and my mom often tears up when talking about my achievements.”

To be considered for the All-Arizona Academic Team, students must maintain a GPA of 3.5 or higher on a 4.0 scale, be in good academic standing, working on an associate degree, demonstrate leadership and be involved on campus and/or volunteer in their communities.

Along with excelling academically in college, both Laflamme and Johnson stay active in their local communities.

Johnson is a volunteer  with the Mohave County Library District, an officer in the Phi Theta Kappa Honor Society, and a math tutor.

Laflamme is also an officer in Phi Theta Kappa and a volunteer in the Bullhead City campus Pumpkinfest and Christmas parade.