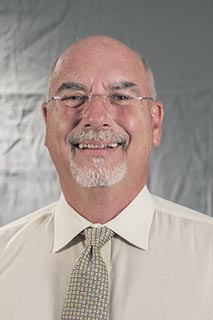 Mohave Community College has a new administrator overseeing all faculty and instruction at the college’s four campuses. Stephen B. Eaton comes to MCC from Barstow Community College in California where he was Vice President of Academic Affairs.

“I’m originally from Michigan, but while vacationing in southern California, I fell in love with the desert and the mild winters and thought ’this is where I need to be,’” said Eaton. “MCC has superb programs which I look forward to working with and promoting.”

MCC is an exciting fit for him and matches his higher education experiences perfectly, he said. His expertise in building program review processes will help the College capture for the public and accreditors the level of excellence provided by the MCC faculty.

“Often college programs do a poor job at self-promotion. As the Chief Academic Officer I want to help individual programs discover their strengths, lessen their weaknesses and tell everyone how good the future is for students who join us,” he said.

He believes the great thing about community colleges is their flexibility in answering the needs of the community, and said that is clearly what MCC is doing. “In the short time I’ve been here, I’ve seen how motivated the staff is in providing relevant and viable programs to the county as quickly as they can.” He looks forward to working with faculty upon their return for the fall semester.
Eaton replaces Paula Norby at MCC. Norby is now the dean of Benedictine University’s Mesa Campus, which is closer to Norby’s family in the Phoenix area.

“Stephen’s come in and hit the ground running,” said MCC President Michael Kearns. “He’s already moving the college forward to help us drive educational attainment and student success at all our campuses. We couldn’t be happier. ”

Eaton earned his Bachelors in Education from Central Michigan University then relocated to Independence, Missouri where he taught high school English and Theatre Arts. During that time, he pursued his Masters in Higher Education Administration from the University of Missouri-Kansas City.

He then returned to Michigan and started his college administration career in student services at the College of Creative Studies in Detroit. He returned to central Michigan when he bought his own business and began teaching part-time at the local community college.

After several years of teaching Speech and English, he returned to administration as the college’s registrar and manager of the auxiliary campus. After several years in that position, he was asked to take on responsibilities in academic affairs and eventually became Dean of Occupational Studies.

During that time, he became very involved with the Higher Learning Commission, becoming a systems reviewer and site visitor for the accreditation process.

After receiving his Specialist in Education degree from CMU, he applied for and was hired as Dean of Instruction at Bakersfield College in Bakersfield, California. Wanting to move closer to his friends and colleagues in Palm Springs, he was hired as Vice President of Academic Affairs at Barstow College.

Looking again for new challenges and to renew his association with the Higher Learning Commission, he joined MCC as his new home in community college leadership.