After 30 years of public service at MCC, John Wilson retires 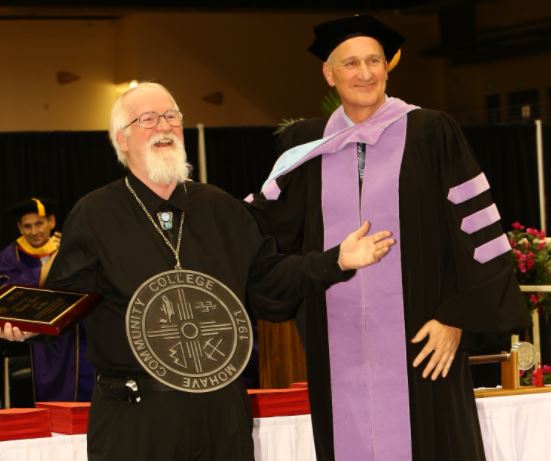 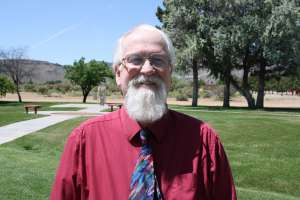 A local legend among the Mohave Community College ranks is heading into retirement this week, after 30 years of public service at the Neal-Campus Kingman.

“John Wilson’s dedication and drive to help MCC, the students and the community is hard to match,” said MCC President Michael Kearns.  “He’s a walking MCC encyclopedia.  If there’s anything you need to know about how the college was and how it’s changed over the past 30 years, John will have the answer.”

Wilson joined the MCC family 30 years ago, when he accepted the job of Learning Center Coordinator.  Since then he’s been the Success Center Director/Director of Adult Education, Director of Events & Special Projects, Assistant to the President, Director of Financial Aid, Registrar, Director of Student Services for Extended Campuses, Records Officer/Credentials Evaluator and an Associate Faculty member.

“They’d say ‘we need someone in this position,’ and then they’d look at me,” Wilson jokes.  His modesty though, can’t hide the fact that his knowledge and skills have been invaluable to MCC.

He’s worked with four College Presidents, 19 different direct supervisors and won many awards. Those awards include the 1995 Award of Merit from the Mountain States Adult Education Association, which honors outstanding contributions toward furthering the concept of adult education.

In 1992-1993 the Arizona Department of Education awarded him for MCC’s GED program marketing efforts.  “We were the first in Arizona to have a GED hotline for students to call a number and get information about when they could take the next test, and when and where classes for it were starting.”

“By the way, Ottumwa was the hometown of Radar O’Reilly, the clerk on the hit television series M*A*S*H,” said Wilson, “Some people might remember that show.”

John said he and his wife, Joanne, moved to Kingman mainly to get out of the frigid Midwest winters.  “Our last winter there, the wind chill was 90 below.  That was enough for us.”

While his wife was driving him to work for his first day on the job at MCC the weather was great, but there was something else that surprised them.

“We’re driving down Jagerson and in the middle of the road are three Ranch Hands leading a buffalo down the street,” he said chuckling. “My wife, who’s from New York City, turns to me and says ‘where have you brought me?’  We loved it.”

Among the many innovative approaches he’s helped develop at MCC, growing the online program stands out to him.  “That’s because we used to mail students videos, then we’d mail the test to a proctor and the student would go there to take the test.  We’ve come a long way.” 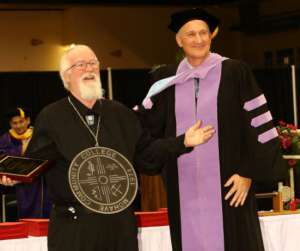 Another major innovation he helped develop was the Interactive Television system, ITV.  “When it first started we were cutting edge because ITV spanned the Grand Canyon and connected students on all campuses.  I got the chance to take it a step further and schedule to have a math tutor available in the ITV room for higher level math classes, such as calculus.”

“John’s dedication, intelligence and humor are going to missed around here,” said Kearns, who presented Wilson with a prank gift during the May Commencement ceremony – a 2 foot by 2 foot round medallion attached to a large metal necklace.  “We just had to do something to help celebrate John’s sense of humor.  He was also our Founders Award recipient, which is given to employees who’ve really gone above and beyond here at MCC.”

For Wilson, helping people achieve their higher education goals in Mohave County has been fulfilling journey.  “Every day gives you an opportunity to learn and grow, and no matter what you’re doing, the number of lives that you eventually affect can be infinite,” he said.