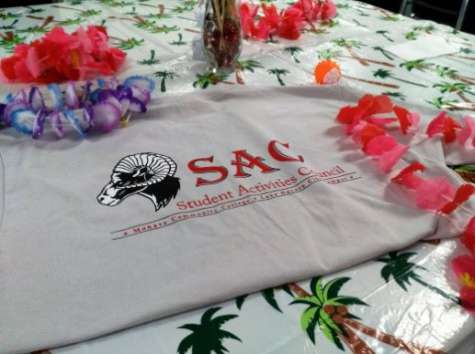 A sign reading LUAU PARTY greeted me as I reached for the door handle of the 600 building on the Lake Havasu City Campus.

As I walked in, the sounds of live music met my ears and I was offered a grey shirt, adorned with the new LHC Student Activities Council logo.  I could see the amount of time and effort SAC had put into this event, and students milled about enjoying the food and activities. Grads could be spotted in the crowd, wearing the red MCC visors that were given to them as they

On one wall was a long table full of wraps and cookies, as well as various drinks. Placed around the room were booths with representatives seated behind, advertising programs and clubs around campus. In one corner, students covered themselves in silly hats and fake mustaches for the photo booth.

Mixed in were decorations filled with palm trees and pink flamingos, rounding out the theme and fun atmosphere. There was even an inflatable Limbo bar in the middle of the room, students laughing as they attempted to squeeze under it.

Overall, the Luau and Gradfest were a resounding success! Congratulations to the 2017 MCC grads, and thanks to the LHC Student Activities Council for putting this on!