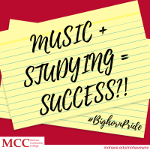 A car alarm goes off. A fly buzzes around the room. The air conditioner kicks on and off. Yet, I hear none of it.

It’s a Monday afternoon, and I have an essay due in Astronomy. My eyes dart over my textbook, fingers poised carefully above the letters of my laptop’s keyboard. I reach around to pull my hair out of my eyes, but my hand catches on a white cord dangling freely in front of my shoulder. I jolt as my earbud is ripped out, the faint sounds of a guitar suddenly playing out for the world to hear.

For as long as I can remember, I have listened to music while I study. All of the errant sounds from the world interrupt my concentration, causing me to find solace in headphones. Generic, lyric-less acoustic tracks become white noise and I dissolve into pure concentration.

I’ve often wondered if my music is truly good for my studying ability. Have I just conditioned myself to focus better with it? Am I actually harming my academic ability? I decided to get to the bottom of this mystery once and for all.

According to a study from Taiwan, the distraction level caused by music can actually depend on the subject. In this study, two sets of students were a given test – one with silence, and other while listening to music. On average, those with the music had lower test scores – however, results were drastically different from student to student. Researchers concluded that more research needed to be done on tempo, genre, and whether the student was used to music while studying.

In 2010, the University of Dayton released a study stating students had better “spatial and linguistic processing” while listening to Mozart, stamping it the “Mozart Effect” and indicating the presence of vocals may break focus more than music without.

With all that knowledge, I think I’ll keep jamming out to my “Instrumental Acoustic Guitar for Studying” playlist on Spotify.

Do you listen to music while studying? Does it help you? Let us know on social media using the hashtag #BighornPride!